How I spent my summer vacation

We went to Amsterdam, New York to buy a painting.  This even sounds strange to me and those who know me best.

I have always been drawn to Amsterdam, New York.  You can see it in a valley from the NY State Thruway, driving between Rochester and Albany.  My sister had the same draw.  We knew our great-grandfather was from there, and we remember him as "Big Grandpa", as our only living great-grandfather when we were babies.  My sister and brother-in-law were returning home from vacation, and decided to stop in Amsterdam, where they discovered Amsterdam Castle and more importantly, the Book Hound, a treasure trove of old books.  Anyone who knows my family knows about the draw books have...


We arranged to have a family weekend there, booking rooms at Amsterdam Castle, and meeting up at the Book Hound.  I did some research prior to the trip, and this was the precursor to becoming a professional genealogist.  I found that this part of our family immigrated from Augsburg, Germany to Amsterdam, New York in the late 1880's.  So, we drove around the city looking to see if any addresses our ancestors were listed at still existed.  They did not.  We also had an ill-fated search for graves in an abandoned cemetery, where the warning of deer ticks came too late.   Despite the lack of new genealogical discoveries, we found the people in Amsterdam to be incredibly helpful and friendly.  While looking for someplace to eat lunch, we asked at the Lucky Mini Mart, and the proprietor was so concerned that he offered to make us sandwiches!  After a stop for cookies and directions at the Dolci bakery, we had lunch at Shorty's Southside Tavern, where my teenaged nephew claimed the bacon cheeseburger the best he had ever eaten, and I agreed!  The family atmosphere at Parillo's Armory Grill at dinner also appealed to our Sicilian heritage.

A little over a year later, I had started my genealogy business, and was researching further into my own family.  I have been captivated with the story of my Swiss great-great grandmother, who immigrated to Amsterdam, New York also.  The Book Hound posted a photo of a painting for sale by a local artist, Brian Jacobs.  The subject, a Victorian woman tying her hair back, could have been my ancestor.  I had to have it.

So, my husband and I drove out there for my birthday.  This time we stayed at Halcyon Farm, the most peaceful place I have ever been.  There were fireflies galore outside at night and spring peepers singing.  We did purchase the painting at the Book Hound, in addition to other memorabilia and books, and had a nice conversation with Dan, the owner.  Unfortunately Brian, the artist, was away that weekend, but I hope to meet him in person next time we are in Amsterdam.  We again bought cookies at the Dolci bakery, where the owners feel like family, and we ate dinner at Parillo's Armory Grill again.  We visited Riverlink Park that evening, also.  We do plan on returning so we can hike around Halcyon Farm.

Amsterdam is in the midst of a renewal, and although it has been depressed by the shutting down on industries, it is a surprisingly welcoming place for tourists, whether they are genealogists or local historians or not.

Posted by Family Sherlock at 3:00 AM No comments:

More about the dream

I am a third-generation Rochesterian- all four of my grandparents were born in Rochester, New York.  Further back my ancestry is early colonial British settlers in Massachusetts, Rhode Island and Pennsylvania, lots of  German, Irish, Swiss and Sicilian.  And Amsterdam.  Amsterdam, New York.  Despite my Dutch surname, I am not from Holland.  My husband may have Dutch ancestry from way back, but so far it looks like it is all German and Danish.  More about Amsterdam, New York- stay tuned!

In addition to doing research for clients, which is a great learning experience for me and adds to the variety of my research, I am also working on a couple of projects about my family.

Those letters I was given as a graduation gift?- I am annotating them (along with  the rest of the set which my uncle inherited) and hope to publish as a genealogical and Civil War memoir.

The other project is a book about my great-great grandparents and their exploits.  Truth is better than fiction.
Posted by Family Sherlock at 3:00 AM No comments:

I had a dream last night about work, and it was not a nightmare!  I was searching through census records, and that is what genealogists do.  How did I get here?

My education and former career:

I spent 25 years in quality assurance in the printing and publishing industry in Rochester, NY, proofreading, researching, testing software, web development, reporting.  I also studied social sciences and foreign languages, and I have degrees in psychology and international studies.  It took me a few months to pull the skills and hobby together, but I established my genealogy business about 10 months ago.

When I was working on my business plan, etc, I asked my family for ideas for a name.  My mother had the winning entry- Family Sherlock.  I always wanted to be Sherlock Holmes when I was a child, and only did not pursue this when I discovered a modern-day detective was usually a police officer, and at barely 5 feet tall, even if I did pass the physical requirements and tests, I do not think anyone would want to work with this tiny recruit on the streets!  So I became a proofreader instead.  Then a legal researcher.  Then a software test engineer.  Then a web and e-mail developer.  I had been studying my family history since I was a child also, and my cousin gave me a set of letters for a graduation gift- these are the background of my logo, along with my old Sherlock magnifying glass:

Posted by Family Sherlock at 9:35 AM No comments:

Friday morning I returned to the Family History Library to do more research.  Then on to lunch at Nauvoo Cafe in the Joseph Smith Memorial Building.  The building used to be an old grand hotel: 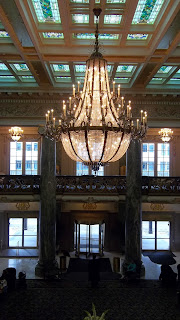 and it had great views of the city from the top floor: 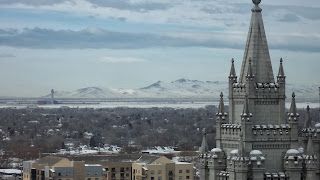 The Association of Professional Genealogists Professional Management Conference started Friday afternoon.  I met many fellow genealogists, and discovered that professional genealogists are not competitive with each other; rather they are very collaborative, sharing tips, ideas, and experiences.  I learned a great deal about running a genealogy business, specializing, creating interesting end products, and other educational opportunities.

When I travel, food is one of the important parts of the trip.  I was given some good tips on eating in Salt Lake City.  Unfortunately, because of the slippery sidewalks due to the snowy weather and time constraints, I was not able to follow up on all the tips.  However, I was able to try what is supposed to be the best Mexican food at Red Iguana by eating at A Taste of Red Iguana.  Even though this is in the food court, City Creek Mall is beautiful, with a creek filled with fish running through the center, and the food was very good! 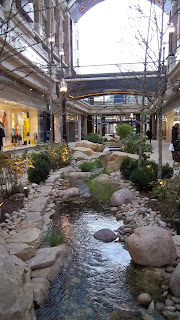 The next two evenings I ate at  Crown Burger, reputed to be the best burgers in Salt Lake City.  I did not have burgers, but the gyros were excellent and the blackberry milkshake was a decadent indulgence.  And it was a quick walk, as I could see the flashing neon light from the hotel room window. 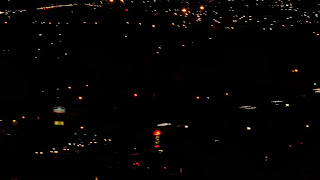 I was disappointed not to have time to try Greek Souvlaki, but they have a location at the airport, and it was way too early on my way home for lemon chicken soup, but I did purchase a couple pieces of baklava, and they were fantastic.

I returned home from Salt Lake City Sunday night.  It took a while to get there, due to the polar vortex... my original flight Tuesday was cancelled, I rescheduled for Wednesday, and then had a long layover in Chicago because the original plane was frozen.

I arrived Tuesday night in Salt Lake, too tired to even eat dinner, let alone do any research.  So Wednesday morning I treated myself to a big breakfast and then spent the day at the Family History Library.  It is 5 stories of microfilm, books and reference materials, with many very helpful volunteers to guide you through the process.  I could have spent weeks there!  But by late afternoon, my head was spinning from so much information, so I decided to call it a day.

Temple Square is right across the street from the Family History Library, so I walked over there in the snow.  It was beautiful. 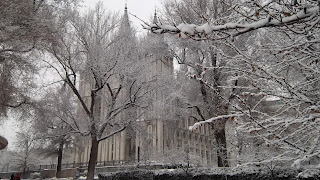 That evening I attended the Mormon Tabernacle Choir rehearsal, here at the Tabernacle: 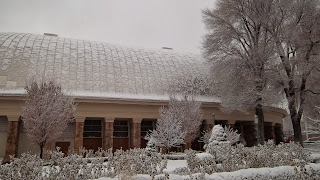 Posted by Family Sherlock at 7:00 AM No comments: