During this pandemic, where family cannot gather for the traditional holidays, I (and much of my family) became nostalgic for Grandma's anise Christmas cutout cookies.  It turns out there were several versions of the recipe around, but my second cousin sent me her mother's recipe card, and this is actually my great-grandmother's recipe.  Not only can we now bake and eat the cookies of our memories, but the connection to Grandma, my Great-aunt, and my Great-grandmother is priceless. 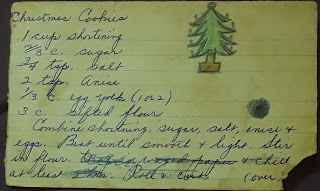 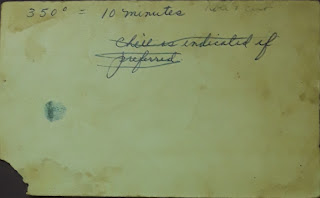 My Great-grandmother, Clara Herrmann Eckhardt, was a Harding from West Pittston, Pennsylvania, who relocated to Rochester, NY in the 1910's.
Posted by Family Sherlock at 9:00 AM No comments:

Happy New Year!  This year, Family Sherlock is concentrating on writing the biography of her great-great-grandmother Anna Ritschard of Oberhofen, Switzerland.  Anna had a true immigrant experience with a twist.  Stay tuned!

To help with this, I will be attending a workshop at the New York Genealogical and Biographical Society called Write It Up!

If you are interested in my other published writing, see the links on my website.
Posted by Family Sherlock at 8:18 AM No comments: 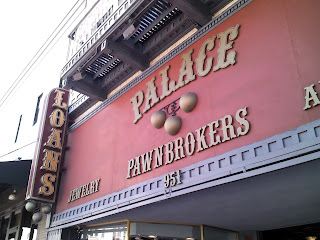 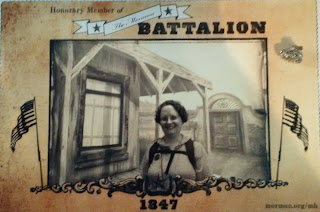 The Society for the Preservation of Irish Soda Bread

I love Irish soda bread, or at least the kind I have made in the past and that is readily available in our local grocery stores this time of year.  It is so easy to make that I never buy it.  I was looking for a recipe for this year and ran across this site: The Society for the Preservation of Irish Soda Bread!  Even though I love caraway seeds and currants, I decided to experiment this time by following the guidelines for real soda bread and just using flour, salt, baking soda and buttermilk.  I have a really hard time following recipes, but the only change I made to this one was to use 1/2 white flour and 1/2 whole wheat flour.  I did not knead it on a floured board but just pulled it all together with my hands.  I did put a cake pan cover over the bread while it was baking, and I did not put any butter in it.  The temptation was great to add the beloved caraway and currants, but I resisted, and thankfully so.  The bread is wonderful.  I have been cutting pieces off all afternoon, and at this rate there will not be much left for St. Patrick's day tomorrow.  But I still have enough pastry flour and buttermilk for a second loaf... maybe I will put some currants and caraway in that one, for variety!
Posted by Family Sherlock at 1:50 PM No comments:

My new publication: The Ancestry of Anne Bretherick and David Greer

My new book, The Ancestry of Anne Bretherick and David Greer, is available for purchase on CreateSpace: https://www.createspace.com/5661888.  It is the genealogy of Anne Bretherick and David Greer, including their Stott, McKnight, Mainwaring, and Steinmetz ancestors of Pennsylvania, Lancashire, England, and County Donegal, Ireland.  If any of these names ring a bell, this book might be for you, too.
Posted by Family Sherlock at 6:21 AM No comments: