A Mother's Love or the Mystery of Uncle Bruce's Adoption, Solved 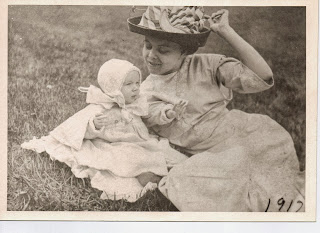 The family has always wondered why Clara Eckhardt's oldest child was adopted. We theorized that he was her illegitimate child, or the illegitimate son of a close relative. When evidence that she had been married more than once surfaced, we thought he may have been her son, and was adopted by George Eckhardt. However, none of these hypothesis were true.
Clara Louise Hermann was born on April 6, 1885 in Pittston, PA, fourth child and second daughter of William Hermann and Elsie Jeanette Harding.1 2 3 On May 20, 1907, Clara married Roland Broadhurst in Pittston, PA. It was the first marriage for both of them.4 Roland was born in England on October 30, 1879 to Daniel and Mary Broadhurst.5 6 7 Clara was 22 and Roland was 27 years old.
On July 8, 1909, Clara lost a baby. She gave birth to a stillborn baby boy named Roland in Scranton, PA.8 9 Between July 1910 and July 1911, her husband Roland relocated to Rochester and worked as a machinist at the Gleason Works. 10 11 12 Presumably Clara moved to Rochester with him.
On November 14, 1911, Hazel Kirk gave birth to a baby boy, John Alden Kirk, in Rochester.13 14 There were two Hazel Kirks in Rochester at this time. Hazel Kirk was born on March 13, 188915 to Henry and Bertha Kirk.16 She married William Pfaffle on September 1, 1912. 17 They had one child, Richard, born about 1918, and they lived in the New York City area. 18 She died in December, 1980.19 Hazel M. Kirk was born about 1890 to John and Mable Kirk.20 21 She married Herbert Bietry on July 20, 1916.22 They lived in Brighton, NY and had no children.23 24 In July 1911, there is only one entry in the Rochester City Directory for Hazel Kirk, and she has moved to Denver, Colorado.25 This would have been during her pregnancy with John Alden Kirk. However, in the 191026 and 191227 directories, both Hazels appear. Hazel M. (Bietry) is a bookkeeper in 191028 and 191229, while Hazel (Pfaffle) is a bookkeeper only in 191230, and is only a boarder in 191031.
John Alden Kirk was adopted by Clara and Roland Broadhurst on January 4, 1912 in Rochester.32 He would be renamed Bruce Frank. Clara must have assumed that she could not have children, but wanted one so much that she adopted. Then she divorced and took the adopted baby with her into her new marriage. On March 6, 1913, Clara and Roland divorced in Scranton, PA.33 Then on May 5, 1913, Clara married George Julius Eckhardt.34 George was born November 11, 1878 to William Eckhardt and Amelia Muisus Eckhardt.35 36 37 He was 34 at the time of the marriage and Clara was 28.
In February, 1914, Clara lost another baby. She gave birth to William H. Eckhardt, but the baby was premature and only lived for 5 hours.38 Clara gave birth to three more children who survived: Edith Amelia was born on April 10, 1917, Elsie Louise was born on September 15, 1919, and George Julius was born on August 13, 1921.39 George Eckhardt died on February 24, 192940, leaving Clara with 4 children.
Roland Broadhurst continued to live in Rochester, first with his mother41 and later with his second wife, Wilhelmina. 42 They apparently did not marry until the late 1930's and did not have children. 43 44 He died in July, 1963.45
The look on Clara's face in the photo above speaks volumes.

When people simply ask what I do, the quick answer is that I can research their family history or solve genealogy questions for them.  My website, www.familysherlock.com, has all of the basic information about my business.  I will use this blog for the other types of questions and requests that come up.  I will not blog about client's projects unless they give me permission, but I will blog about my own projects.  So no client has to worry about those skeletons in the closet!

I have been asked a couple interesting questions recently:

Can I research adoptions?  In general, no, and this is for two reasons.  If an ancestor was adopted in the 19th century or earlier, the family may have just taken the child in, with no paperwork, etc.  If it is a recent adoption, the records are most likely sealed.  However, there are exceptions.  I found my great-uncle's birth records recently, and I will put that story on this blog later.  So, if a client has an adoption in their ancestry and wants me to do some research on it, I certainly can, but there will be no guarantee of any results.

Can I find an ancestor's health history?  Again, medical records are sealed, so I cannot provide this information.  Occasionally death certificates, cemetery records, or obituaries indicate cause of death, but this is not really a health history of the person's lifetime.  Again, I could research cause of death but with no guarantee of results.  A client could also take a DNA test such as 23andme to find out a little more about their inherited health history.  Although I have little experience with these test, I could refer clients to a genealogist with more experience.
Posted by Family Sherlock at 3:00 AM No comments:

This past weekend Family Sherlock attended the first New York State Family History conference.  It gave her a chance to meet many local genealogists and several prominent national ones, including D. Joshua Taylor, one of the hosts on Genealogy Roadshow, which premiered on PBS last night!
Posted by Family Sherlock at 5:34 AM No comments: